Who benefits from renewable energy in Africa? 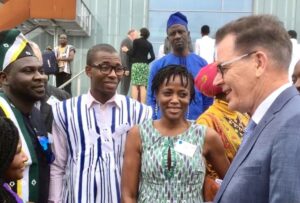 Berlin, January 20, 2022 - For sustainable development in Africa, it is not just a matter of how many renewable energy systems are built, but how many people benefit directly from them.

Göppel wants prosumers, people who not only consume energy but also produce and manage it.

Report to Federal Minister Dr. Gerd Müller about trip to Tanzania and Kenya​​

Nine-day trip from Josef Göppel to Kilimanjaro and to the coffee farmers at Mount Kenya - his impressions and recommendations to Federal Minister Dr. Gerd Müller can be found in the following report.

The state of Benin on the west coast of Africa is about the size of Bavaria and Baden-Württemberg. In the coastal plain there is a sense of optimism, in the outback bitter poverty. For Josef Göppel, the focus of this journey was on improving the situation of women. His impressions and recommendations to Federal Minister Dr. Gerd Müller can be found in the following report.

Spirit of optimism in Ethiopia

In Ethiopia,  a country in Eastern Africa and with 105 million inhabitants, the election of a new head of government raised new hope for an independent development. Germany supports the craftsmen training and use of renewable energies. The impressions of Josef Göppel and his recommendations to Federal Minister Dr. Gerd Müller can be found in the following report.

Triesdorf, June 7, 2018 - 25 young Africans from ten countries are currently completing a five-month qualification course at the Franconian FH Triesdorf. All of them have their Masters degree already. With training in Germany, they want to get to know the economic and legal system of this often admired country. The program also includes visits to companies, social institutions and administrations.

Josef Göppel, as BMZ Special Representative for Energy in Africa, has encouraged Minister of Development, Dr. Gerd Müller, to finance such courses. He says it is important to incorporate the views of future African leaders into German development policy.

The four young people from Ethiopia give Göppel background information for his upcoming visit to the country. The lack of access to electricity in rural areas is one of the main reasons for the migration to the slums of the capital Addis Ababa.

The project "Grüne Bürgerenergie für Afrika (Citizen-Energy for Africa)" therefore funds the training and start-up of businesses in the renewable energy sector. This should gradually develop a middle class, which can launch in conjunction with personal partnerships with German organizations, an independent development.

In which way is Germany able to help giving future prospects to Africa's young people in their home country? Exploring this was the job of Josef Göppel, BMZ Special Representative for Energy in Africa, on his trip through Tanzania. His impressions and recommendations to Federal Minister Dr. Gerd Müller you will find in the following report.

New York, April 21, 2018 - Matteen Mokalla and Andrea Havis: We asked politicians from conservative parties around the world about their thoughts on climate change. In the 3.41 min video following, they show their views. They are very different from those of American conservatives.

Video: We are conservatives and we believe climate change is real

Berlin, June 27, 2017 - There are hardly any power grids in the rural areas of Africa. Germany will therefore support the training of young solar entrepreneurs over the next five years and provide them with partnerships with German energy groups. Josef Göppel is volunteering in this project as Energy Officer of the BMZ for Africa. In 2016, he proposed a project to the minister as a result of his travels to Africa, focusing on craft training and business start-ups. Göppel wants to switch from aid projects to partnership management on equal terms. A central point is the access to electricity outside the grid connection.

Therefore, he proposed an energy partnership with Africa, which consists of three elements.

At the headquarters of the cooperative association at the Brandenburg Gate around 300 experts discussed the new approach at a congress.

Uganda's Energy Minister Irene Muloni described the urgent needs in her country. A mayor from Mozambique and a solar entrepreneur from Cameroon reported on their practical work. His final statement was: "For us, everything that comes from Germany is strong! It works."

You are cordially invited to contact Josef Göppel at info@goeppel.de with questions or ideas.

Josef Göppel was born on 16 August 1950 on a small farm in the Franconian village of Rauenzell near Ansbach in Bavaria. He grew up with a strong attachment to the land and became a forester. He worked as a forestry engineer for 28 years – mostly outdoors. Göppel is married and has four daughters.

In 1972, he became involved in the local politics of his home region. After eight years in the Bavarian State Parliament, he was  elected directly to the German Bundestag in 2002. There he was a member until 2017. In the Bundestag elections, Göppel’s personal votes have far surpassed the second votes for his party every time; in 2013, the figures stood at 53.3 percent to 47.6 percent.

All his political activities  focus on living and working in harmony with nature. A key cross-party initiative in the German Bundestag can be traced back to Göppel: members of government and opposition parties joined forces in the Future Forum on the Environment, where they made the case for more sustainable environmental policies.

Göppel has been the head of the CSU’s environmental working group  1991 - 2017. He has played a significant role in shaping the party’s environmental platform. Within the party, he has a reputation as a sometimes difficult and persistent unconventional thinker. The media regard him as the green conscience of his party.

As a forestry engineer, in 1986 he founded the Landcare Association of Middle Franconia. His aim was to overcome the bitter divisions that existed at that time between environmentalists and farmers. The initiative became a success, and today there are 170 Landcare Associations in Germany, with equal representation of farmers, conservationists and local politicians. Göppel has been head of the German Association for Landcare since 1993.

In the mid-90s he joined the International Eco-Social Forum and worked on the Global Marshall Plan Initiative.

In 2005 he founded the Renewable Energies Network in the Middle Franconia region together with business representatives, craftspeople and scientists. In 2014 this led to the creation of the Franconia Regional Electricity cooperative, which aims to sell electricity directly to those in the immediate vicinity of the production sites.

He stood firmly by Federal Chancellor Angela Merkel in 2015, when her generous policy of receiving Syrian and African refugees came under harsh criticism from parts of  CDU and CSU.

Since 2017 he is working unsalaried as a  energy representative for Africa on behalf of  the German Ministry for International Cooperation.

An outsider’s view proves revealing – the following text appeared in the local press after an appearance at the Nürnberger Presseclub:

"Göppel is a true conservative. He wants nothing more than to preserve creation. The CSU Member of the Bundestag approaches politics through the lenses of his Christian faith and his long experience working with nature. He has been known to get on the wrong side of people, whether it be his fellow party members or supporters of conventional growth policies. He was the only member of the CSU to vote against generating electricity from nuclear power in Germany long before the start of the energy transition."

This website uses cookies to improve your experience while you navigate through the website. Out of these, the cookies that are categorized as necessary are stored on your browser as they are essential for the working of basic functionalities of the website. We also use third-party cookies that help us analyze and understand how you use this website. These cookies will be stored in your browser only with your consent. You also have the option to opt-out of these cookies. But opting out of some of these cookies may affect your browsing experience.
Necessary immer aktiv
Necessary cookies are absolutely essential for the website to function properly. This category only includes cookies that ensures basic functionalities and security features of the website. These cookies do not store any personal information.
Non-necessary
Any cookies that may not be particularly necessary for the website to function and is used specifically to collect user personal data via analytics, ads, other embedded contents are termed as non-necessary cookies. It is mandatory to procure user consent prior to running these cookies on your website.
SPEICHERN & AKZEPTIEREN